The 1963 film, “From Russia with Love” is great for the following reason: In the span of 5 minutes, there’s a belly dancer, a gypsy girl-fight, a gun-shootout, a riot, and then an implied menage-a-tois between the two gypsy girls and Bond. All in about five minutes. Thanks Tivo!

I rented another movie, suggested by my friend Barry. “The Yes Men” These guys are trying to shock people by impersonating WTO representatives in front of corporate fat-cats saying this outragous, greedy stuff to point out how outragous and greedy corporations are, and how the WTO is exploiting 3rd world countries. The problem for the Yes Men was that the corporate drones took what they had to say seriously. They did this one bit where they compared offshoring for cheap labor to slavery (like it was a good thing), and the corporate guys ate it up like it was a great idea. All in all, it was a pretty good movie.

Yesterday I got a call from a woman who said her PC wouldn’t start. I tried the power supply, the switch, nothing. Then I figured out she had the switch off at her multi-power-switch doohickey. Oh, it was plugged in, but the friggin’ switch was off. Imagine my chagrin . . .

Today I took a machine home to reformat it. When I put it on the bench, the keyboard wouldn’t work. After that, it stopped posting. The motherboard crapped out right before my eyes. Luckily it was an ancient PC and I just replaced it with one I had on the shelf. They don’t use it for much, and I’ll give them a good deal. Dammit.
No comments:
Labels: James Bond, motherboard, Yes Men

chives, tryptophan, Lions, Joey, and the Joys of The Holiday Spirit

The blogger community is all abuzz in anticipation of my next blog post. So here it is:

Chives: Is there anything that doesn’t taste better with chives? I don’t think so. It’s certainly great with sour-cream dip, but there are other things: Oreos and Chives. Chive Beer. Chive flavored edible underwear. Vanilla ice cream topped with delicious, fresh chives. God had his thinking cap on when he invented chives. Oh yes. I am thankful for chives! Say it with me now . . . . “CHIVES!”

Yesterday we ate turkey. I’m a fan of tryptophan, that’s for sure. Wikipedia takes all they mystery and fun out of the Tryptophan myth:

According to popular belief, tryptophan in turkey meat causes drowsiness[9]. Turkey does contain tryptophan, which does have a documented sleep-inducing effect as it is readily converted into serotonin by the body. However, tryptophan is effective only when taken on its own as a free amino acid. Tryptophan in turkey is found as part of a protein, and, in small enough amounts, this mechanism seems unlikely.[10]

A more-likely hypothesis is that the ingestion of large quantities of food, such as at a Thanksgiving feast, means that large quantities of both carbohydrates and branched-chain amino acids are consumed. Like carbohydrates, branched-chain amino acids require insulin to be transduced through the myocyte membranes, which, after a large meal, creates a competition among the amino acids and glucose for insulin, while simultaneously creating tryptophan's reduced competition with other amino acids for the Large Neutral Amino Acid Transporter protein for transduction across the blood-brain barrier. Alcoholic beverage consumption at holiday feasts is likely to compound the effect.

They got the booze part right! Just kidding kids. Drink responsibly! I took it easy on the booze yesterday.

The Lions did their usual screwed up job. Not only did they get beat, but they got beat by Joey Harrington, in his first appearance back in Detroit since moving to the Miami Dolphins. Way to go Lions, can’t even blame him this time. Jesus! What’s it take to bring these Lions around?

Today I am wrapping presents. I’m in the Holiday spirit, probably more than at any time in the last twenty years. I don’t know. I’m actually enjoying getting things ready for Christmas this year.

So. There’s this game called Second Life, which is basically this waste of time chat room in 3d, but it’s kind of cool because you walk around and people make all kinds of things and anyway . . . last night I bought a Led Zeppelin tee-shirt in the game. Today I was looking at books on Amazon.com, and guess what; they “suggested” that I might be interested in Led Zeppelin albums. Coincidence? I think not!

My bestselling novel is going gangbusters. There has never been a more unreadable heap of crap produced in a long time. Hopefully it will be made into a movie.
No comments:

I really hate the day before Thanksgiving. It isn’t really a work day, and it isn’t really a holiday. Usually I don’t get any calls, (this is my 4th year working for myself) and the kids are home and the day drags and drags and drags. I got some writing done. I’m still going through World of Warcraft withdrawals. I’m having a hard time filling those hours I wasted on gaming. I have managed to read another book cover to cover. That’s helping. The pages in my upcoming International Best Seller (IBS doesn’t’ just stand for “irritable bowel syndrome”) and I’m seriously thinking about combining two of my false-starts into one really big false-start.

I picked up dog poop. We’re giving that dog too many snacks. There was crap everywhere and it seems like I picked up poop just the other day.

Deb and the girls are preparing the turkey for turkey-day.

I have all four of my book manuscripts on the desk and I realize I’ve typed a pant-load of pages. That and a bunch of short-stories. All of them unmitigated craptastic hoo-haw.

I can't believe this isn't on Utube.
No comments:
Labels: evolving mural

check out this internet music site: www.pandora.com. Punch in a song title, and they make as "station" with music you'd probably want to hear. It works. Pretty cool.
No comments:
Labels: music

Slow day. Didn’t have any work until 4PM, when I flew to Rockford to tighten the hinges on a Dell Dimension 1100 laptop screen. Leaping into action, I mounted my trusty Ford Taurus of Technology and raced to a secluded bungalow off of Spring Lake, where I cannibalized an old laptop for hinge screws and restored the machine to near pristine quality.

I sent some NoWaterBall golf balls out unto the world. I visited one company, but could do nothing for the proprietary software. But I met some folks and I’m sure they’ll be calling me for all technological thingies.

I haven’t watched any football this year because the Lions suck ass. But Saturday I’ll be watching Michigan(2) and Ohio State(1) in the big game. Both teams are 11-0. Should be pretty friggin’ exciting.

Watched Thank You for Smoking the other night, and wrote a review on my movie review page.

I want each and every one of you using the Internets to go to nowaterball.com and order the greatest novelty golf balls in the world for presents this Holiday season.
No comments:

Yesterday I made Level 60 in World of Warcraft. Last night I played for almost an hour, and then realized I’d done what I intended to do, which was to make level 60. So I cancelled my account, uninstalled the software, and BURNED the installation CDs with the trash so I wouldn’t be tempted to re-install it. That game is too addictive for me. It’s kind of sad, a forty-year-old man playing a game that much.

This morning I hooked up DSL connectivity smoothness to a family from India. How odd. I went to the home of an Indian family, and when I called tech support to make sure they had DSL signal, I got an guy in America. Weird.
No comments:

Yesterday I replaced the kitchen sink soap dispenser, replaced the drain thingy, you know where the plug goes? And re-caulked around the sink. I hate plumbing in all of its forms.

Today we raked leaves. We watched some movies; you can read three new reviews on my Movie Reviews Page at the greatest website in the world, www.danmanning.com.

Don't forget to vote Tuesday. Throw the Bums out!
No comments:

danmanning.com ~ Procrastinator's Homepage I'm such a procratinator, I had to make this page and make it my browswer homepage. Gee hope it works.
No comments: 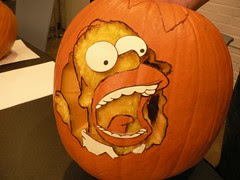 Finally, some checks came in the mail. Plus, when I went to the post office to buy stamps they were playing Madonna’s 1986 megahit “Papa Don’t Preach” on the loudspeakers. While I waited in line I got to contemplate Madonna’s reasons for why she wanted to keep her baby.
No comments:

Yes! Rob Corddry (from the daily show, duh) has a blog/column thingy. He writes as funny as he acts.
No comments:

Went to two Halloween get-togethers last night. At one place, I saw this amazing thing: Ultimate Fighting Championship (UFC) fighting. It was friggin’ great, these two dudes came out and kicked the shit out of each other. I had to ask if this was allowed in the US, and apparently, it is. So I’m going over there later this month, cause the guy gets pay-per-view to watch these fights. This one dude was bleeding all over the place, and they let them keep fighting. It was sick.

Otherwise, I’m invoice rich and cash poor. I did a bunch of work for this one place in early October, and I’m waiting for the checks to come in. Meanwhile, we’re flat-ass broke.

So I haven’t been in the mood to blog at ya lately. I’m so sick of going to the mailbox and seeing no checks in there. Self employment is fun, but it has its drawbacks.
No comments:
Newer Posts Older Posts Home
Subscribe to: Posts (Atom)