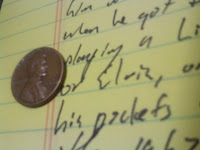 On Thursday, I found a 1962 penny on the sidewalk next to the courthouse.

How many pockets has that penny been in, do you think? Was it ever in a coffee can, or an ashtray, or a wine bottle on some hippie's shag carpeted floor? How many cash registers has it rested in, with those little black plastic trays with the curved bottoms so the cashiers can easily scoop out the coins? Cashiers with painted nails, chewed nails, painted chewed nails, and unadorned well-clipped nails. How many people handled this penny, with short fingers, long fingers, hangnail fingers, fingers with warts, fingers orange from Cheetos, and fingers that picked noses? Fingers that wiped asses and made potato salad and typed on typewriters. Fingers that had been stuck into bowling balls and gloves and cookie dough. Fingers covered in chicken grease and fingers covered in movie popcorn butter. Fingers that punched TV remotes and pulled triggers and wrote letters. Fingers lost to diabetes or frostbite.

This 1962 penny was probably in at least one penny-ante poker game and maybe flipped for "heads or tails". It was stacked up with other pennies on a desk, in stacks of ten, or rolled across a kitchen floor.

This penny has changed hands many times, has been in penny rolls at the bank, in kitchen junk drawers, in gumball machines, and in mechanical grocery store ponies. Was it ever washed in a washing machine? Was it ever thrown into a wishing well or a fountain? Did any of those wishes, for money or a miracle cure or a job or a boyfriend or girlfriend or for the beatings to stop, or for the yelling to stop, or for him to just call, or for him to just stop calling, or the war to stop or the bills to somehow get paid or anything else ever come true?

Did this 1962 penny ever rest between couch cushions? Did it ever roll under a soda machine? Was it ever on the floorboard of a car, under the floor mat, to be almost vacuumed up at the car wash by one of those vacuum cleaners that cost a quarter to use?

Did a pregnant girl ever hand it to her boyfriend and say, "penny for your thoughts," just as he was thinking that in three weeks he would be shipped out to Vietnam? Did he lie and say, "finals" or "my mom" or "that juggler on Ed Sullivan last night," or anything except the fact that he was afraid he was going to die? Did that penny shine in the sun that day? Is that guy still around somewhere? Is he a one-armed old man with a scraggly gray beard wearing a hat that says "VETERAN", thinking about that long-lost twenty-year-old girl with the long tanned legs and impish smile and straight black hair parted in the middle?

I picked up that penny while a cop gave someone a parking ticket down the block. Had this penny ever been used in a parking meter? Was there ever a time when parking meters took pennies?

It was very cold when I picked up this penny. The frozen ghosts of lines of salt sat crystallized on the sub zero concrete like the tracks of icy snakes. Great plumes of vapor breathed out of the cop in his black hat with ear flaps, and the red faced banker in his long black coat who should have worn a hat, and the couple in their Goodwill-ready "nice" clothes holding manila envelopes, hurrying up the courthouse steps to file papers or argue or appear or report or appeal or pay fines or marry or divorce or whatever poor people do in courthouses on Thursday mornings in December.

Was this 1962 penny ever in one of those "leave a penny, take a penny" dishes you see at cash registers? How many times, if it could hear, would it have heard the phrase, "have a nice day"?

Did kids ever put it on a railroad track on a warm summer night so it would be squashed flat by an approaching train, which was still off in the distance? Did their hearts beat a little faster when they heard the train's sad whistle? Did this 1962 penny vibrate off the smooth track at just the last second, dropping safely down on the white rocks while the train passed over clackity-clack, endless boxcars covered with graffiti messages from all over America? After the train passed, did the kids listen to the train fade away, and then notice the street lights were on, so Tom had to sprint home or his mom would be "really mad", and after that, did Jane's good-looking mother call her in? Did the third kid, left alone, put the pennies, squashed and whole, into his pocket and walk home very slowly? Did the cicadas and frogs sing and whine, and did the June bugs swarm the streetlights, and did the stars twinkle overhead while he got a strange feeling about the future, and long summer nights, and things unknown, and the wide world and everything in it? And when he got home, were the folks on the couch watching Perry Mason, or Mannix, or Hawaii Five-O, or Johnny Carson in the darkened living room? Did his mother ask him what he was up to, and did he say, "nothing", and when he got to his room, did he hear his sister playing records across the hall, an Elvis record, or the Beatles or the Partridge Family, or Queen, or Van Halen or something, and did he empty his pockets out onto his nightstand, and did the penny, my penny, the 1962 penny I found Thursday morning, roll off the nightstand and roll under his bed and stay there for a week or so before his mother found it and used it to help pay for a box of laundry detergent and a TV Guide?

All of that was long ago, but now I have the penny. It's right there on my desk next to my laptop.
Labels: essays

Great essay on the life of a 1962 penny. Wouldn't it be amazing if you could actually determine all of the places a single penny may have been. It could have been practically everywhere, or maybe it never went more than a couple of feet. One can only wonder.

That was fun to read. I just found a 1962 penny on a hotel room floor and was googling to see if it is worth anything since it is 50 years of age. It isn't, but found your blog so I consider it valuable since it led me to it.