# TODAY I AM THANKFUL FOR GENERAL DWIGHT D. EISENHOWER 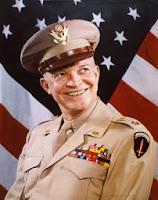 General Eisenhower was the Supreme Commander of the Allied Forces in Europe, and I don't know about you, but I think that is one kick-ass job description.

As a boy growing up in Kansas, Eisenhower converted a small barn into a makeshift laboratory, where he invented the Internet, the National Highway System, and NASA. Young Dwight was a childhood friend of Clark Kent and Dorothy Gale.

But then, a threat emerged in Europe, and our three young friends joined the army, fighting the Nazis and having adventures. Who can forget the stirring images of Eisenhower, Superman and Dorothy Gale leading the charge onto the beaches of Normandy?

Finally, on April 30th 1945, Eisenhower tracked Das Feuer to the Berlin bunker and killed Adolf Hitler after an exhausting shirtless knife fight while a terrified Eva Braun looked on. It ended with Eisenhower slowly pushing his Bowie knife into a wheezing Hitler. Eisenhower said. "Shhh, shh. It will be over soon. Shhhh." Hitler's disgraceful last words were, " Ich habe gerade gekackt ein wenig." ("I just pooped a little.") With this knife fight, Eisenhower won World War II, launching the careers of a both Tom Hanks and Steven Spielberg.

On his Internet blog, IKE'S PLACE, Eisenhower warned: "In the councils of government, we must guard against the acquisition of unwarranted influence, whether sought or unsought, by the military industrial complex. The potential for the disastrous rise of misplaced power exists and will persist." And we totally guarded against that, and whew, we dodged a bullet on that one. No misplaced power here. No way.

He once punched Joseph McCarthy in the face and said, "Cool it with the witch hunt stuff man, this is America."

Eisenhower had absolutely nothing to do with 1953 coup in Iran and all of its unintended consequences. Nope.

Moving on: He proclaimed that, "Blacks and whites should be able to go to school together. Stop being such racist dicks you guys," and everyone was like, "General Eisenhower killed Hitler, we better do what he says," and so ended racism.

After WWII, General Eisenhower was Army Chief of Staff for Harry S. Truman, but after killing Hitler, ending racism, averting the police state, and inventing the Internet, being a "Chief of Staff" was a letdown. "I used to be Supreme Allied Commander, by comparison, this sucks," so he pursued his destiny and went on to become the 13th President of Columbia University.