Here is Nathaniel Hawthorne, in the mid 1850s, describing Resting Bitch Face (alternatively known as Bitchy Resting Face) in his book, The House of the Seven Gables

"Face to face with this picture, on entering the apartment, Miss Hepzibah Pyncheon came to a pause;regarding it with a singular scowl, a strange contortion of the brow, which, by people who did not know her, would probably have been interpreted as an expression of bitter anger and ill-will.  But it was no such thing.  She, in fact, felt a reverence for the pictured visage, of which only a far-descended and time-stricken virgin could be susceptible; and this forbidding scowl was the innocent result of her near-sightedness, and an effort so to concentrate her powers of vision as to substitute a firm outline of the object instead of a vague one.

We must linger a moment on this unfortunate expression of poor Hepzibah's brow.  Her scowl,--as the world, or such part of it as sometimes caught a transitory glimpse of her at the window, wickedly persisted in calling it,--her scowl had done Miss Hepzibah a very ill office, in establishing her character as an ill-tempered old maid; nor does it appear improbable that, by often gazing at herself in a dim looking-glass, and perpetually encountering her own frown with its ghostly sphere, she had been led to interpret the expression almost as unjustly as the world did.  "How miserably cross I look!" she must often have whispered to herself; and ultimately have fancied herself so, by a sense of inevitable doom.  But her heart never frowned.  It was naturally tender, sensitive, and full of little tremors and palpitations; all of which weaknesses it retained, while her visage was growing so perversely stern, and even fierce."
No comments:
Labels: literature

"Clever as a gizzard"
The Scarecrow
Makes no sense

Stairway to Heaven
At memorial service
Turn off your cell phones 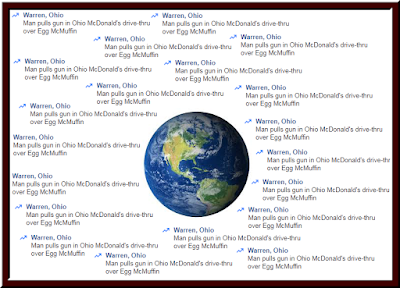 Anything is possible
Except folding clothes
While eating Cheetos

The panicked
Old woman
Sees a message
On her screen