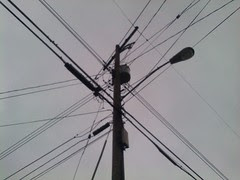 In heaven they have caviar
Served by Billy Graham

In hell they have shit sandwiches
That Satan makes by hand

In limbo it is peanut butter crackers every day
They're not too bad, but not too good, I guess that they're okay.
No comments:
Labels: poetry

Who is the gruntled employee,
Who grins and takes the shit,
Who gets to work on time each day
But dreams he will someday quit?

Who is the gruntled employee,
Who grins and bears his load,
Who sits in his cube and knows
He's a rube, but hasn't the nerve to explode?

Who is the gruntled employee
Who eats lunch at his desk
Who does his job and is just
A slob who won't put himself at risk?

Who is the gruntled employee,
Who knows his time will come,
While the CEO rakes in the dough
The spreadsheets render him dumb.

Who is the gruntled employee,
Who worries his job is extinct?
Insurance wont' pay and he
Needs layaway and suspects he's somehow been tricked?

Who is the gruntled employee
Who wears a clip-on tie?
Who parks in the lot and his belly's a pot
Cause he scarfs cafeteria pie.
No comments:
Labels: poetry

to kill a cat

On slow days I write rotten fiction, drink tea and threaten to kill the dog.

Oh, I threaten to kill the dog about a thousand times a day, but she is do cute. I say, "Ginger, I'm going to murder you in about five minutes." Then I immediately say, "oooh, you're so cute, I can't murder you right now." Then later she'll bark at something and I'll say, "I hate you so much. I'm going to kill you and make it look like an accident."

Sometimes I threaten to kill the cat. Lately she's been meowing in the middle of the night for no reason and I am ready to strangle her. I'm trying to figure out ways to make it look like an accident. The problem is, cats aren't particularly accident-prone, and so I'm thinking of making it look like a skydiving accident. I've just got to find a place that allows cats to skydive and also lets the owners pack the parachutes for the pets. I've scoured the Internets and the phone book with no success.

I don't think I've got what it takes to go through with it.
No comments:
Labels: pets

Last night I was visited by three ghosts. Or maybe it was two ghosts and one creepy old man, I'm not sure anymore. The first was the ghost of Elvis Presley. Not Fat Elvis, not Fifties Elvis or Bad Movie Elvis, but '68 Comeback Special Elvis, perfectly side-burned, tanned and vibrant at a mere 33 years of age. This is the Elvis just four years before his divorce and The Fattening.

My tire had blown on 131, North of Rockford, coming home from a Parcheesi competition. There was no cell phone service, as is always the case on misty November nights with unseasonably mild weather.

Elvis pulled up in a Ford F150. He got out and from the passenger seat, someone yelled "Lets give him a lift, E."

I was in the middle of putting the "doughnut" spare tire on.

Elvis took it from me. "Doughnuts are for eating, not driving on." He took a bite of the spare tire, and ate the entire thing. "Come on."

I accepted the ride, what more could I do? They were heading south and I wanted to get home.

The passenger in the truck got out. It was J. Edgar Hoover, wearing the dress from Beyonce's "Single Ladies" video. It was disturbingly short and gruesomely tight. He leered at me, his fat face behind thick glasses. His sparse greasy hair was in a pitiful comb-over.

I had to sit in the middle. There wasn't much room.

"We didn't just stop by chance," Elvis said. "John, get me my candy will you?"

Hoover reached into the glove box and brought out a prescription medicine bottle. Hoover dumped five or six pills of different colors and sizes into Elvis's hand, and Elvis popped them in his mouth. He had a can of Schlitz in the cup holder and he took a swig.

We were careening down the road at ninety; a light mist fouled the windshield but Elvis seemed unaware. He didn't put on the wipers. The tail lights of the other traffic were just blurs as we snaked through the traffic. The speedometer approached one hundred.

"We're supposed to meet someone in town," Elvis said. "We need someone of the living as a go between."

"Don't worry about that," Hoover said. He threw a manila envelope on the dash. "We just need you to hand him this."

who are these smiling devils?

Who are these vile men who have robbed us? These men who can't recall how it happened? These well-dressed men, these well-heeled, well connected little men with their jewel-encrusted lives, with their trophy wives and mansions behind gates of brick and iron? Who are these thieves of old women's savings, these destroyers of jobs? Who are these men in expensive ties, this smiling devils in expensive ties who trade imaginary coins, who bet our tiny treasures out from under us, who ask us for more, who tax us by proxy, who sell us lies, who bind us in impossible contracts written with impossible words in a language of their own creation that is impossible to understand? Who are these titans who are too big to fail? Who are these men in princely dress who sit and smile with fresh haircuts, with their limited liability and Windsor knots and prepared statements who tell us how they can't recall how they became wealthier than kings? Who are these spawners of empty strip malls and foreclosed houses? Who are these lordly aristocrats who contribute nothing? Who are the ruling class? When did this caste system come about? Who are these devils in their ties that squeeze us for more, these prescription drug pushers, these loan sharks and cookers of books with their slick commercials and shiny advertising campaigns? Who are these gentlemen surrounded by private armies in Ivory Towers in the sky? How do they believe that they will one day fit through the eye of a needle? These men who have made us a nation of debtors, a nation of worried-well hypochondriacs who are told to ask our doctor, ask our doctor, ask our doctor? Who are these devils who poison our minds with network drek, these thieves, these propagandists of prosperity, who hypnotize us when they whisper:

"Strive, and you can be like one of us."

Lies. They want us to be obedient workers. We will not be allowed to join them. They will loan us the money to strive for material things and then make slaves of us all. They will enslave us with an idea of sophistication. Their goals and the goals of the common man are not the same. They preach free enterprise, but they get gargantuan handouts from the treasury that no poor person on welfare will ever receive. They have privatized their profits but socialized their risk. They take a King's Ransom while our roads and schools and hospitals and society fall apart around us so they can live like Gods.

Why exactly are these smiling devils in charge?
No comments:
Labels: RANTS

Muzak Moment: Paula Abdul's 1988 hit "Opposites Attract" while buying milk and bread at the grocery store, 8:03 AM. None of the senior citizens were dancing. They cut out the "MC Scat Cat" rap, which was a relief.
No comments:
Labels: muzak moments

Chevy has a commercial where Howie Long compares Chevys to Hondas. In the end he says, "Honda has one thing we can't compete with..." and they show a Honda lawn mower. I guess that was supposed to make some kind of point, but my first reaction was, "Why can't Chevy make lawn mowers?"
1 comment:
Labels: TV

This is the day that the tilt of the earth in relation to the sun, atmospheric conditions, and the complete total of all circumstances up to this point in time has made!