# THE NEW SPEEDWAY IS OPEN! FREEDOM!

The Speedway near our house has been closed for a couple of months.  They tore it down to build a new one.  It is just a few blocks from our house.  Oh how we took it for granted.

So it opened today, just three hours ago, and despite the 98 degree heat, Deb and I walked there to check it out. 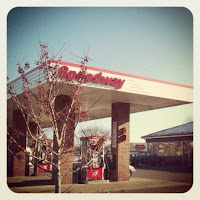 As we walked toward the future, to that grand spaceship that was the new Speedway, I dreamed of all the magical things that would be there: lotto, beer, meat-like things, snacks, donuts, pizza-adjacent foodlike items, candy, chips, an ATM, gasoline... everything my American Freedoms allow me to enjoy.

Old Glory flew high and proud above the car lot next to the Speedway.  The New Speedway was open! It was open! Oh the Freedom to exchange American currency for products and scratch-off tickets.  I was like Charlie, and I had a Golden Ticket to the Wonka Factory, only the tickets were green, and the Wonka Factory was a convenience store.

We strode in as though striding through the very gates of heaven.  If Elvis Presley himself was behind the counter, I would not have been shocked, for this was heaven on earth.  Lite Beer and Lotto!  Breath Mints and those brown gloves with red lining!

Wide eyed with innocent wonder, we walked the candy isles.  There were HUGE bags of sunflower seeds!

Everything was new and shiny.  The employees, yet to die from the inside out, gave the impression of actually being alive inside.  Their spirits were yet to be broken!!  There was a WALK IN BEER COOLER which I walked into. It was very cool in there.  I didn't want to leave.

They had Coca-Cola in GLASS BOTTLES.

Oh to be Free and American in this great land.  To buy lotto tickets and a 40oz. Lite Beer in the same place!  Hunting magazines and car magazines!  5 Hour Energy and Snickers bars!

My first Muzak Moment in the new Speedway?  Kansas's 1977 smash hit, "Dust in The Wind."

I stood there a moment, serenaded by a 35 year old recording of soft guitar, and pondered what this all meant as four flavors of Slushies slushed around in their American Freedom Slushy machines.