The file is here:
http://www.danmanning.com/sounds/DMDC-103.mp3

To stop receiving this obvious spam, reply and tell me to stop sending you spam. 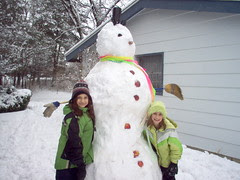 The girls made a snowman today, and named him "Big Head Steve." This is the girls with Steve.

I dropped a PC off and couldn’t get the damn scanner to recognize for about an hour and a half. I hate scanner software that doesn’t work.

So there I was, shoveling the driveway, breaking my back, when I see this pickup truck with front and rear plows pushing tons of snow around like it was nothing, and I waved him down and paid him fifteen bucks to do the driveway. I’m going to hire them for the season next year I think. It was awesome not having to shovel snow.

Today I did data recovery for one of my clients. I forgot my coat. I got three calls and scheduled them for later this week.

We watched “The Prestige” and it was pretty good. Trick ending.
No comments: 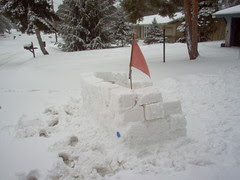 scratch that! I DID get outside today. Drove Deb to the big grocery store for supplies, and then I made this awesome snow fort.
1 comment: 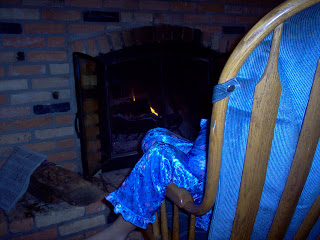 Today is cold and snowy out. I made a fire, made some soup, took a nap, and we generally hung out at the house all day, cause what else is there to do? Savannah is reading one of the Harry Potter books, so she gets to sit in front of the fire.

My soup is awesome, as usual.

I gave up on another book and started writing a story I hope will be funny.

The file is here:
http://www.danmanning.com/sounds/DMDC-102.mp3

recent searches that led to my awesome website, danmanning.com:

Gimme Strength The Video for Ray (V4R) is complete!
No comments:

one of the geekiest paragraphs I have ever written

Today I ran. Not “Iran”, but “I ran.” as in, running. Tomorrow maybe Iran, unless the madman in the Whitehouse can be stopped. But that's a whole 'nuther post altogether.

But right now I want to talk about the awesome 1.2 miles I ran this afternoon. I did it because my golf-partner and programming demi-God Brian made this cool-ass website, workoutdump.com which has all the gizmos and whosits that makes you want to log something on there because otherwise you look like a friggin’ slacker. So I actually donned my running gear and braved the not-so-cold and ran twice around the .6 mile loop in my neighborhood. Okay, I ran around the block twice.

Anywhoo, otherwise, I had one call today and one reformat. I spent most of the day round the house. The kids are out of school for “winter break” whatever the hell that is. Teachers are friggin’ slackers, I swear to God the get three months off a year but the got to have a “winter break” too. It is uncalled for.

In computer geekatude, I was at the gpokr site getting my poker on when I talk to somebody who had a League of Awesomeness duckie avatar from The Show with ZeFrank. This is one of the geekiest paragraphs I have ever written.
No comments:

i made totally awesome soup today

Today is Thursday and I made computers talk to each other at a law office. I made some TOTALLY AWESOME soup, with bacon, chicken, wine, potatoes, celery, mushrooms, and carrots. It’s still cold and snowy outside, but I’m in the hizzow.

I’ve had a rash of reformats and I’ve been burning them down and building them up like clockwork. I’m reading A People’s History by Zinn and a few Conan short stories.

I’m waiting for my new cribbage board to come UPS. I joined the Dawn and Drew Minion Army today.

I put out the Danmanning.com Podcast #101 today. The International uproar over #100 is finally dying down, although I am now banned from the People’s Republic of China.

My friend Don was in Amsterdam yesterday (wink wink, nudge nudge) you can follow his World-Record attempt at his blog.

In the news, North Korea finally signed an agreement to stop being dickheads, and the only person upset about it is Former UN Ambassador and total Dickhead John Bolton.

Well, that is all.
No comments:
Labels: awesome soup

If you came here for an enterntaining read . . .

If you came here for an entertaining read, this ain't it. I got nothing funny or interesting to relate to you all. It's winter, it's cold out, and I have cabin fever.

I've been busy working, reading, playing cribbage, drinking beer and otherwise occupying myself as best I can during these fantastic winter months.

I wish I had something more interesting to say.

Don is traveling the world on his World Record quest.

If you're reading this on blogger, go to my webpage. That is all.
No comments:

There's been a lot of rumors going around about me lately, what with the death of Anna Nichole Smith. I'd like to set the record straight right now: I am not the father of Anna Nichole's baby. I've been in a happy marraige for over a decade now, and despite my good looks, charm and obvious manly virility, I am not the father of Smith's child. I would however, be willing to take the child in, as long as the money comes with the child.
1 comment:

Astronaut arrested on attempted kidnapping charges - CNN.com the details of what they found in her car . . . love will screw up even the brainiacs.
No comments:

Yesterday we had a snowstorm. We got a lot of snow; the whole region was pretty much shut down. It was a day to stay in. So I did.

Sunday, I woke up and there was even more snow. Shoveled the walk and made a fire and hunkered down. Around four I went to the Hideout and got a jug of delicious IPA and got ready for the game.

And what a game. I’m typing this during halftime, but the first half was one of the best halves I’ve ever seen.

Hester runs the OPENING KICKOFF back for a touchdown, and it was touchdowns, fumbles (back to back), missed extra points, and everything you could ask for in a first half.

Commercials? The best, IMHO, is the Grand Theft Auto knockoff commercial where the guy does nice stuff instead of violence. The Spicy/Cheesy Doritos commercial was good, and the “Connectile Dysfunction” commercial for Sprint was pretty good also. There was a GPS gadget commercial where it sounded like Iron Maiden was playing the music. There was a Voltran-type robot fighting a map-monster. Pretty cheesy-cool.

AND THE HALFTIME SHOW DIDN’T SUCK! Prince can still wail on the guitar. I can’t remember the last time the Superbowl halftime show didn’t’ suck.

So during halftime I checked the public school’s website, and tomorrow’s a snow day.

No Superbowl party this year because our wives are either working or pregnant, and the roads are worth shit because of the snow, so we’re hunkered down in our houses.

Grossman gets sacked two times in a row in the third.

Geeky weirdness: So I’m blogging this game with the laptop and text-messaging my buddy, and we both have DVRs, so we don’t know where the other guy is at in the game (because of pause or fast-forward with DVR), and you don’t want to spoil it, so you can’t actually talk about the game real-time because you might spill something that hasn’t happened on the other end . . . Jesus Christ I’m a geek.

Kevin Federline’s only decent song was in this Nationwide commercial . . .

Big Chicago crowd at the Superbowl. . . .

Flomax! it makes you faint. I have no idea what it is supposed to do. 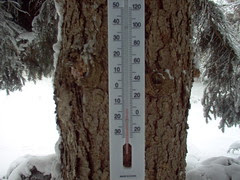 it's friggin' cold out!
No comments:

Today I replaced a hub with three switches. I diagrammed some network wiring. I showed somebody how to use a flash drive. I met a fan of the Ze Frank show. I made super-dark window blinds. I got my oil changed, got a haircut, bought some stamps, and tried to get my car washed, but the car wash was closed. It was snowy and cold out.
No comments: