something useful on the Internets

Yes, I know it's hard to believe, but I can actually use this site: 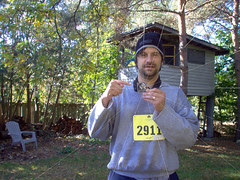 Today I ran the Grand Rapids HALF marathon. That's 13.1 miles of pure awesomeness. It was cold and DARK at 7:00 this morning. I and a couple of other runners commandeered a Metro Health VIP tent with a heater in it and waited for the start. Normally I listen to music when I run, but the website said it wasn't allowed, and I, being a rookie, didn't bring my tunes. Of course, every other person had their headphones on. I did pretty good, or at least I thought I was until I realized an 80 year old man was pretty much beating me, and on mile 9 I finally caught up with this lady who was POWER WALKING! So with no music, I decided to improvise and I sang "Working in A Coal Mine" the DEVO version. That got me in a good rhythm; good thing too. I finished in 2:26:28. The guy who won the full marathon (26.2 miles) finished about thirty seconds after I did. At least I "beat" that guy.

Anywhoo, I am awesome. Oh yeah, they had beer and food at the end. That was cool.
1 comment:
Labels: running

Hi, this is a generic blog post. Today I did some stuff. Some stuff happened on the news, and I'm planning on doing some stuff later. When I do some stuff, or hear about something interesting, I'll post it here. Thanks for reading.
No comments:
Labels: generic blog post

Her arm was found near the accident still clutching a cell phone.

A Letcher County woman suffered a horrible injury early Thursday when her arm was severed in a car crash on the Mountain Parkway in Clark County.

Jacqueline Dotson and her six-year-old daughter had to be cut out of their vehicle after the accident in which Dotson veered into the median and over-corrected, rolling her truck over the guardrail and landing upside down after flipping several times.

Several people stopped to help, and it turns out, the good samaritans may very well have saved Dotson's life. Sheila Vice, a nurse's aide, and an off-duty EMT from another county stopped to help, and put a tourniquet on Dotson's arm to stop the bleeding. Her arm was found near the accident still clutching a cell phone.

"Basically we stayed there and talked to them until the EMT drivers got there," said Vice.

Rescuers used the jaws of life to get the Dotson and her daughter out of the truck. Both were flown to hospitals, and Dotson is listed in serious condition at UK Hospital. Her daughter is not in the hospital, and sheriff's officials say they believe she's going to be fine.

Both were wearing seat belts.

The site doesn't actually host any copyrighted material. It just provided LINKS to it, the guy gets arrested anyway.

Probably the most popular video streaming site around has been busted by UK authorities.

It's a sad day for streaming video fans everywhere as news has been reported that TVLinks has been shut down and the owner, a 26yo man from Chelteham in the UK, was arrested.

Though not hosting an actual content himself, and rather merely providing links to where particular titles can be found, he was nonetheless apparently charged for the "facilitation" of copyright infringement.

"Sites such as TV Links contribute to and profit from copyright infringement by identifying, posting, organizing, and indexing links to infringing content found on the internet that users can then view on demand by visiting these illegal sites," said a spokesman for Federation Against Copyright Theft (FACT) today.

What makes the charges so odd is that he was again, only providing LINKS to pirated content, and never actually hosted anything. Can linking really be considered "facilitation?" If I link to TVLinks am I then a co-conspirator?

This is a good one:


See all my reviews at http://www.danmanning.com/37.php
No comments:
Labels: books

living life to the fullest

Here are some new terms I saw on a CNN piece:

Agnorant: Someone who is simultaneously ignorant and arrogant.

Bluetool: Someone who wears their bluetooth thing in their ear all the time.

Multislacking: Slacking at multiple things at the same time.

I dunno, I thought those were funny.
No comments:
Labels: dumb stuff

The war didn't rage really; there was just a steady flow of dead and dismembered soldiers whose names were on the Internet and on the news programs. The soldiers were black, Hispanic, white and Asian. Some of us paid attention and some of us didn't and some of us were devastated. If you didn't know any of the unlucky ones, then they were only statistics.

These statistics were given on the network news between the school shooting and the celebrity scandal stories. The numbers were tallied with somber patriotic video graphics. Maybe it was an American flag waving slowly, or maybe a combat boot-rifle-helmet combo. These graphics looked great on our high-def wide screen televisions. "What a shame," we said, shaking our heads. When the story about the latest breakthrough in the treatment of osteoporosis came on, we changed the channel to VH1 or ESPN and forgot all about the war.

Some of us didn't think about the war at all.

With no draft, it was a voluntary thing to go to and get blown up. It was okay that those brave men and women were getting mangled because they were volunteers; no one was forcing them to enlist and reenlist.

If you could get a job and make decent money, there was no reason to go. If you came from a wealthy family, it didn't make any sense to go. And with the advent of yellow-ribbon car magnets, we had a convenient way to ease our conscience and support the troops at the same time.

That was our attitude anyway, and we went on with our lives as if nothing was wrong. Those were fascinating times, and we couldn't fit it into our busy schedules to enlist. We played newer and better video games, we surfed more rich and interactive websites on ever shinier and faster computers. If we didn't like the war, we could always say so on our blogs. We carried fancier, more feature-rich phones. We drove more technologically advanced cars, and while those cars were all built overseas, we didn't care because they had Ipod docks to give us music, GPS to give us direction, and DVD players to give us a break from the kids. Some of those vehicles got decent gas mileage, but most of them did not.

Some of us drove massive pickup trucks and SUVs with shiny grills, and those things take gas. What a sense of awesome power these behemoths bestowed upon us as we moved between desk and cubicle and home and hearth. These machines carried us back and forth to work so we could pay our crazy mortgages.

We didn't have time to go fight a war. Reality shows were coming up with more interesting twists. Starlets and singers were in and out of rehab. These were interesting times.

There were new drugs to keep us thin and happy. They put us to sleep at night. They calmed our restless legs and gave us everlasting erections. We had a pill for everything, so we were happy.

Were other people making sacrifices? Sure, but we were willing to pay that price. Now we had a military base over the precious, sweet, life-giving oil.

With no draft, the rest of us could take it easy. There were sporting events to watch and alcohol to drink. We were civilians, and we did what our President asked us to do.

Start growing it out boys and girls

Read it and weep asswipes! If you cut your hair, you aren't a Christian. Ha ha ha ha ha. The bible says it, so let it be done you heathen bastards! Start growing it out boys and girls, or you will burn in the everlasting fires of Hell. Ha!

DETROIT -- The American Civil Liberties Union of Michigan won a religious liberty lawsuit Wednesday on behalf of a ninth-grader who refused to obey a school’s dress code that required boys to maintain “closely cropped” hairstyles.

Judge Kathleen Macdonald at the Wayne County Circuit Court ruled on Wednesday that Claudius Benson cannot be expelled and will return to the public charter school, Old Redford Academy in Detroit.

Benson, 14, was enrolled in Old Redford Academy for three days when he was suspended on grounds that he was not in compliance with the hair provisions of the school’s dress code. Check out this awesome Nintendo themed scarf. She only made one, otherwise, it would make a great gift.