I am in Virginia for Jim's retirement. There is no snow here and it is warm. Watching tv and drinking coffee with Superman, who is pantless Recording a podcast. According to the weatherman, it is snowing back in Michigan.
No comments:

the history of evil . . .animated

The state of being wrong at every conceivable scale of resolution. That is, from a distance, a fractally wrong person's worldview is incorrect; and furthermore, if you zoom in on any small part of that person's worldview, that part is just as wrong as the whole worldview.

Debating with a person who is fractally wrong leads to infinite regress, as every refutation you make of that person's opinions will lead to a rejoinder, full of half-truths, leaps of logic, and outright lies, that requires just as much refutation to debunk as the first one. It is as impossible to convince a fractally wrong person of anything as it is to walk around the edge of the Mandelbrot set in finite time.

If you ever get embroiled in a discussion with a fractally wrong person on the Internet--in mailing lists, newsgroups, or website forums--your best bet is to say your piece once and ignore any replies, thus saving yourself time.
No comments:
Labels: stupidity

Thank goodness! Scientists have discovered the blackest black ever. When will it be available for tee-shirts?
No comments:

Tell it like it is man!
No comments:
Labels: politics, religion

The poetry of Roger Clemens

The poetry of Roger Clemens. - By Hart Seely - Slate Magazine
That's a funny way to put it. Poetry
No comments:

AOL: a clown-hat duct-taped to the Mona Lisa

I am the king of reformats. I can take a crappy machine and fine-tune it into an Internet slicing work of art.

So some of my customers us AOL, a bloated crapfest software abomination.

So after I make this masterpiece, I have to load this throbbing goiter onto the PC.

It's like if I went to the Louvre in Paris and duct-taped a cardboard clown hat on the Mona Lisa.

What a shame, what a horrible shame . . .
No comments:
Labels: stupidity, tech

Congress is wasting our tax dollars grilling Roger Clemens and his former trainer Brian McNamee on which one of them are lying about Performance Enhancing Drugs. I don't care and neither should you and I. If rich guys who get paid to hit a ball and run around in a circle want to take PED.s (is that an acronym?) let them.

Clemens: "Let me be clear, I have never taken steroids or HGH."

McNamee: "Make no mistake, when I told Sen. Mitchell I had injected Roger Clemens with performance-enhancing drugs, I told the truth."

In fact, all professional athletes should be REQUIRED to take PEDs. Then we could get on with our lives and sleep peacefully, knowing that a bunch of rich dudes are playing their sports on an even playing field.

You know, it's a waste of time staying sober when you stay up till 2:30 in the morning listening to your iPod after staying up til midnight playing World of Warcraft. Performing sleep deprivation experiments on yourself mid-week is stupid. That's no way for a grown man to act. Suprisingly, I'm in a good mood.

Spring is in the air! This morning it is a balmy 19 degrees, not the bone-crushing, soul-taking crippling cold we've been having recently.

Who the @#$%^ is Amy Winehouse? The first thing I ever heard of about her was that she was a drugged up "troubled singer" headed for rehab or worse. I was like, "okay cnn.com, never heard of her, i really don't give a sh!t". Then I stumbled across an article on Slate with a YouTube link to her Grammy performance. Turns out she's not just a British version or our own drunk, stupid, suicide-in-waiting Britney Spears. She's not just a drunk bimbo. She's actually talented, and kind of hot in a sleazy, white-trash way.

Temperatures are up, Hillary is down. Business is up. Snow plows are catching up, and there are only 36 days until spring.

Let all peoples of Earth live in peace and Harmony.
No comments:
Labels: generic blog post

some notes from The Brothers Karamazov by Fyodor Dostoyevsky 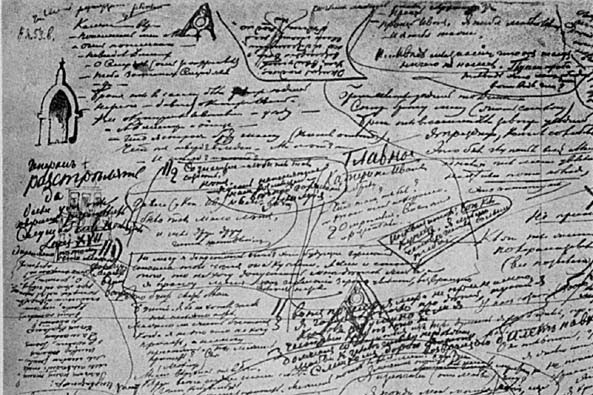 These are the notes from chapter 5 of The Brothers Karamazov by Fyodor Dostoyevsky I'm in the middle of reading it (actually, pg. 64) and it kicks ass. Anywhoo, I looked it up on Wikipedia, and they had this page of notes Dostoyevsky made while working on chapter 5. Damn. I got notes like that , but my writing sucks. (So far)
No comments:
Labels: books, words, writing

Today I synched 25 GB of data goodness. I repaired a CD player by cleaning up the Operating System. It took an hour to drive from downtown to home because of the snow. Tomorrow I get my taxes done.
No comments:
Labels: generic blog post

Had the weirdest of problem; one laptop could only access one website from their office network, but all the other machines worked fine. The laptop worked fine on any other network. I got it fixed (reformat) but I never figured out what caused the problem. Otherwise things have been pretty uneventful.
No comments:
Labels: tech

The Giants beat the Patriots. There's probably enough written about it on the Internets. What an fantastic win. I actually jumped off the couch when the Giants made that last touchdown. Fantastic. Mannings rule the Superbowl! Ha ha ha Patriots! Yay.
No comments:
Labels: sports, superbowl

I wrote this waiting for my order at buffalo wild wings. It isn't easy to type on this thing, but it gives me something to do while I wait. I also like how everybody looks longingly at this shiny gadget
No comments:
Labels: generic blog post
Newer Posts Older Posts Home
Subscribe to: Posts (Atom)