Cris Collinsworth is so annoying my daughters mentioned the annoying man talking over the football game, so we were forced to mute the television and put on classical music during the Patriots/Giants game instead of listening to that blowhard Cris Collinsworth ruin another football game. We enjoyed Wagner's "Ride of the Valkyries", Prokofiev's "Montagues and Capulets", Pachelbel's "Canon" and a host of other classics. My thanks goes out to Cris Collinsworth for an enjoyable evening with my family listening to classics so we wouldn't have to listen to you for 4+ hours being stupid.

I woke up at 5:00 this morning and cleaned my desk. I sent out 4 short stories, and through the miracle of electronic mail messages, or "email" as the kids like to call it, I got a reject letter the SAME DAY! A first. I re-wrote the ending to one story.

Savannah drew the most amazing bird sketches. They are suitable for framing.

Spoke to Barry for about an hour. Sat in front of the fire and read a book and wrote while Deb and the Girls went to baby Savannah's 2nd birthday party.

I had a root canal yesterday. Today I have vicodin :)
No comments:
Labels: art, books, sports

Merry Christmas everybody. The presents are opened, the fire is in the fireplace, the wrapping paper is burned, and we're just chilling out at the Manning estate.
No comments:
Labels: generic blog post

these statues are friggin awesome. here's the link heard about it on the dawn and drew show.
No comments:
Labels: art

if the beatles wrote "stairway to heaven"

This is possibly the Greatest Video EVER!

You've got to see this video, it is the best thing I've seen on the Internet in a long time.
No comments:
Labels: music, video

Here's the List of Crap I've watched. It's off the top of my head and probably incomplete and inaccurate, but here it is:

Your Government Loves You.
No comments:
Labels: paranoia

notes from the coffee shop

I’m in a Beaner’s Coffee Shop, and there are three young men writing some theological paper for college, something about "God gave man free will", and "Man walked away from God” etc, etc, and they are right at the next table. I want to scream, “You idiots are arguing and spending all this time about something that doesn’t exist! You might as well be arguing about Battlestar Galactica plot points!”

But I’m doing the same thing, because In the back of my mind, I think someone is going to read these words, but that “someone” may never exist.

(later . . .) These idiots are still at it. Now they’re trying to argue why Jesus was put on the cross. I’ve always imagined in my mind Christians sitting around debating how many angels can fit on the head of a pin, but I never imagined a stupider exchange of hot air in my most derisive imaginings. These two are so incredibly stupid.

(still later . . .)and now they’re parsing the word “submit” as in “wives submit to their husband.” The one guy actually says: “So I looked up the meaning of the word ‘submit’ and it doesn’t actually mean ‘submit.’”

Jesus F*cking Christ, will you guys stop wasting my money on this retarded sh*t?

Behold House Resolution 847, one of the many things on which these fucktards in the 110th Congre$$ are wasting time. The intrinsic retardation of this piece of shit legislation transcends satire or mockery. This bill is it's own comedy bit. The very radioactive nature of its stupidity, its disregard for the separation of Church and State, and the blatant use of a loaded issue to coerce votes boggles the mind and reaffirms my 0% hope in anything positive emerging from this cabal of worthless corporate-cock-sucking plutocrats.
No comments:
Labels: dumb stuff, news, nihilism, politics, propaganda, RANTS, stupidity

So I'm listening to the local radio, usually I listen to NPR cause I like to think I'm a brainiac snob, but today I'm listening to (radio voice) Classic Rock 96.9 WLAV and they run this commercial from Woodland mall. It has two lady shoppers at the mall chatting, and they say something about "every time you spend $250.00 and be entered in an American Girl sweepstakes." and I'm thinking, who in the HELL is spending $250.00 at the mall more than once? Who are these people? So I check the website:

Do you have the Internets? Do you have headphones? Then go to this place:

and give it a listen. It's relaxo music.
No comments:
Labels: music

what your government is up to:

How about H.R. 1955, where they basically outlaw revolution; so you can't even talk about the government when they start really screwing up.

and H.R. 3791, where they'll hold anyone with an open wireless connection (coffee shops, bookstores, etc) responsible if someone looks at something bad on the Internets.
No comments:
Labels: paranoia

The Story of Stuff with Annie Leonard

The Story of Stuff with Annie Leonard I highly recommend spending twenty minutes watching this
No comments:
Labels: consumerism 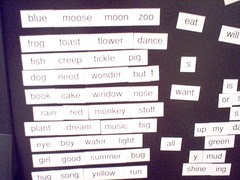